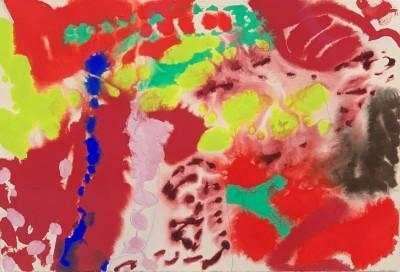 A leading figure in twentieth-century British Art, Patrick Heron played a major role in the development of post-war abstract art, much of his work also reflects the influence of the extraordinary light, shapes and textures to be found in the landscape surrounding his home in Cornwall.

Patrick Heron trained at the Slade School of Arts, London under Schwabe and worked as an assistant in the Bernard Leach Pottery where he met Ben Nicholson and Barbara Hepworth, before moving to London.

Patrick Heron began exhibiting at the Redfern Gallery, London in 1947 and continued to show there until 1958. Though in 1952 Patrick Heron had experimented with abstract painting, it wasn't until 1956, when he moved to St. Ives, that he took up abstraction and in 1957 painted the first of his stripe paintings.

In 1958 Partick Heron took over Ben Nicholson's former studio and began to introduce shapes that were to characterise his paintings in the 60s and 70s, where colour was to become a dominant concern.

Patrick Heron was awarded many prizes including Grand Prize in 2nd John Moores Liverpool Exhibition, 1959; Silver medal at the VIII Bienal de São Paolo, Brazil, 1965; received Honorary Doctorates from the universities of Exeter, Kent and the Royal College of Art, London. He was created CBE in 1977.