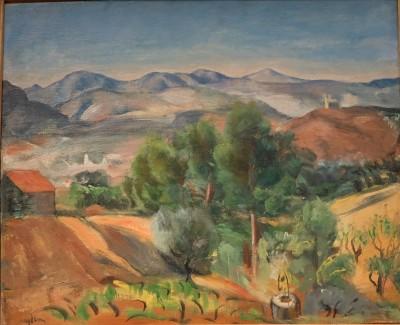 Henri Hayden, a Polish-born artist, first studied at Warsaw Polytechnic and at the School of Fine Arts before arriving in Paris in 1907. Only four years later, in 1911, he held his first one-man exhibition at the Galerie Druet in Paris. From that point onward, Paris became his home. He was an Ecole de Paris painter, mainly of still life and landscape.

Hayden's career as a whole represents a real talent, whose periods of significant creativity occurred at the beginning and end of a long professional career.

His first important picture, The Chess Players at La Totonde, in the manner of Cezanne, was shown at the Salon des Indépendants in 1914 and shortly afterwards he was introduced to Juan Gris, by a fellow Pole, the sculptor Jacques Lipchitz. Soon after, Hayden began his Cubist period, between 1916 and 1921. Gris led him to the dealer Léonce Rosenberg, and through him to Metziner, Severini, Picasso, and Matisse, all significant influences on the artist.

Although Hayden produced a fine series of cubist pictures, the most famous The Three Musicians is now in the collection of National Museum of Modern Art, Paris, he never completely adopted the Cubist aesthetic.

From 1922 his oeuvre took on a more figurative manner, especially in landscape painting, which proved immensely successful with dealers and the public. By 1950 there were signs of a return to a sub-cubist mannerism in his work, and as a result, the landscapes and still lifes of his last 20 years became both more simplified and more definitely composed than the previous period. Never fussy or labored, with elegant calligraphy, they combine a new richness of color with lyrical melancholy.
Meditation and purity of vision mark the painter's last years.