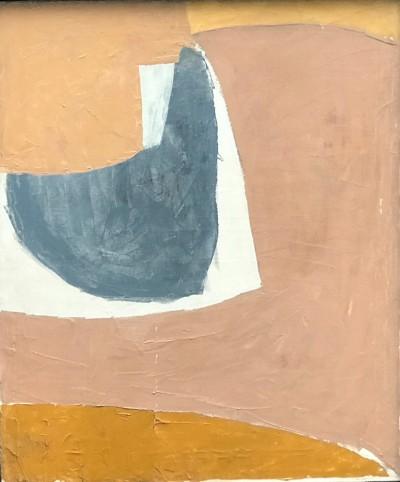 Roger Hilton is widely thought to be one of the best and most adventurous painters of his generation and one of the pioneers of abstract art in post-war Britain. His paintings can be as rumbustious as the life he led. However abstract they became, the human body was never far away. Spontaneous in gesture, they show him to be one of the boldest yet subtlest colourists.

Roger Hilton studied at the Slade School of Fine Art, London from 1929 to 1931 under Henry Tonks and afterwards in Paris where he developed links with painters on the Continent. During this time, Roger Hilton showed annually with the London Group and had his first exhibition at the Bloomsbury Gallery in 1936.

Roger Hilton served with the commandos during World War II, was captured and spent three years as a prisoner of war.

After the war, Roger Hilton worked as a school teacher as well as a lecturer at the Central School of Arts and Crafts, London.

Roger Hilton held his first solo exhibition in 1952 at the Gimpel Fils in London.

Based on his visits to France and influenced by Mondrian’s work while in the Netherlands in 1953, Roger Hilton started to produce abstract paintings. However, in the late 1950s, Hilton’s work became more figurative, following his frustration with the limitations of abstract painting.

Roger Hilton visited Cornwall frequently drawing the inspiration from the colours and rhythms of the natural world which he observed and moving there permanently in 1965.

Roger Hilton became a prominent member of the St Ives group gaining an international reputation. In 1963, he won the John Morris painting prize and was appointed CBE in 1968.

Roger Hilton's second marriage was to Rose Phipps. By 1974 he was confined to bed with a muscular disease.

During the last period of his working life, Roger Hilton returned to the childlike subjects of animals, boats and nudes that had characterized his early work, using cheap poster paints and children’s brushes. Hilton deliberately approached his art with a childlike freshness of vision, but one marked by a lifetime’s experience.