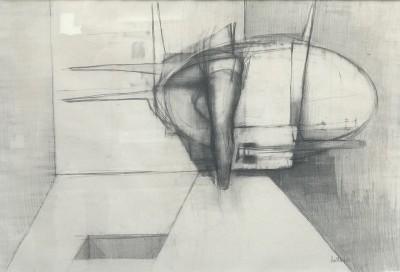 Born in Buntingford, Hertfordshire, Reg Butler was a British sculptor, draughtsman, and printmaker, although an architect by training (his work included the clock tower of Slough Town Hall, 1936).

Reg Butler began making sculpture in 1944, without formal training, but architecture remained his primary activity until 1950 when he gave up his practice and became the first Gregory Fellow in Sculpture at Leeds University. In 1953 he came to prominence upon being awarded the first prize in the international competition organised by the Institute of Contemporary Art for a Monument to the Unknown Political Prisoner (overcoming Calder, Gabo, and Hepworth among other established artists).

The monument was never built - one of the models is in the Tate, London - but the competition established Reg Butler's reputation among the finest British sculptors of his generation.

Reg Butler's later work returned to a more figurative style, focusing on sculptures of nude women in contorted poses, exploring the stresses and strains of the female form.

Reg Butler learned iron-forging when he worked as a blacksmith during the World War II and iron remained his preferred material, although he was a sensitive draughtsman and made drawings as independent works whilst also producing a few lithographs and wood engravings. An articulate writer and radio broadcaster, Reg Butler vigorously argued the case for modern sculpture; five lectures he delivered to students at the Slade School in 1961 (where he taught from 1951 to 1980) was published in a book form the following year as Creative Development.