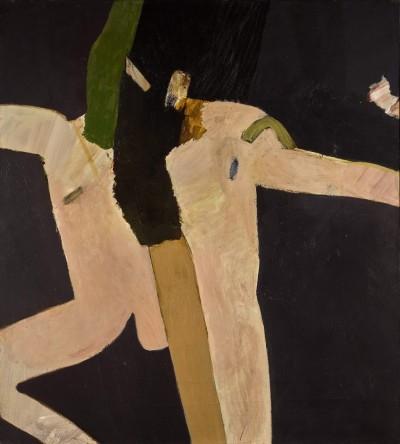 Oil on canvas
102 x 91.5 cm
Signed, inscribed with the title and dated verso

John Keith Vaughan was a British painter, draughtsman, designer and writer. He is best known as a painter of figure compositions that attempted to balance male nudes within abstract environments.

John Keith Vaughan was born in Selsey, a seaside town in West Sussex. He attended Christ’s Hospital School where the headmaster was H. A Rigby, an authority on the artist Frank Branwyn whose murals adorned the school chapel, and Rigby encouraged his evident interest in visual arts.

On leaving school Vaughan was employed by Lintas, an advertising agency. Privately he continued to paint, mostly with oils. He abandoned a career in advertising in 1939 to pursue painting but was quickly interrupted by the war. For most of the war, he worked as a clerk and German interpreter in a prisoner of war camp in Yorkshire where he found time to draw and work in gouache and he also started a journal which he continued throughout his life.
Vaughan was a self-taught artist and his drawings of army life in World War II attracted a great deal of attention. It was during the war that he formed influential friendships with the painters' Graham Sutherland and John Minton.
On his return to London in the immediate post-war period, he entered the circle of Peter Watson and shared a studio with his friend John Minton until 1952. In the 1940s Minton and Vaughan became one of the leading exponents of Neo-Romanticism.

After 1945, Vaughan travelled in the Mediterranean, North Africa, Mexico and the USA, where he was a resident artist at Iowa State University in 1959. He taught part-time at several art schools in London, most notably Camberwell School of Art (1946-8) and the Slade School of Fine Art (1959-77).
His later work concentrated on his favourite theme of the male nude in a landscape setting. They became grander and more simplified, moving towards abstraction.

In the 1950s and '60s, Vaughan became, with Francis Bacon and Lucian Freud, a leader of the new figure-based painting practice in Britain. As well as painting, Vaughan designed textiles and book-jackets. His varied activities brought him critical and financial success, including being elected an honorary fellow of the Royal College of Art (1964) and appointed CBE in 1965.

However, his book Journal and Drawings (1966), which was inspired by Andre Gide, revealed deep insecurity about his work and role in life. The book includes extracts from a diary he began in 1939 and, as well as containing many perceptive comments about art, gives a remarkably frank (and often highly amusing) account of his homosexuality and his struggle with cancer; a struggle which ultimately led to his suicide in 1977.