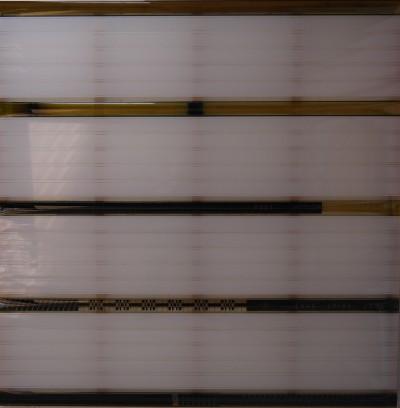 As a medium firmly entrenched in contemporary art, the film can be time-scrambled by Douglas Gordon, metro-sexed by Matthew Barney, or stilled to compelling enigma by John Baldessari.

Carter Potter has another approach. A hometown movieland boy from L.A., he makes found-film art objects, which he calls "film paintings," by affixing filmstrips to form a picture surface across stretcher bars, usually in neat, square configurations.

Potter's 'film paintings' are not exactly paintings. Each artwork is made out of 70mm IMAX film wrapped horizontally across a painting stretcher.

Everything about them reads like a painting: the way they hang on a wall, the use of a stretcher (which is plainly visible through the film), the mix of abstraction and figurative elements. The importance is given to the frame of the subject again rather than the subject itself.

His work is original and visually compelling.

Potter, who lives and works in Los Angeles, has been making this kind of work for over ten years. He seems not to run out of new things to do with the film, which is a credit to his imagination. For years he made his work from only the colorful leaders and feet of film stock. The paintings that Potter built from that material are bright, visually bouncy abstractions.