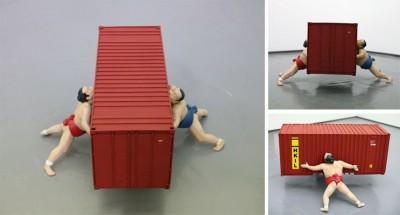 David Mach studied at the Duncan of Jordanstone College of Art, Dundee from 1974 to 1979 and subsequently at the Royal College of Art, London from 1979 to 1982. He went on to become a part-time lecturer in the Sculpture School, Kingston University from 1982 to 1993 and a lecturer at the Contemporary Art Summer School, Kitakyushu, Japan from 1987 to 1991. He has been Visiting Professor at the Sculpture Department, Edinburgh College of Art since 1999 and in 2000 was appointed Professor of Sculpture at the Royal Academy Schools, London.

Mach’s first solo exhibition was held at the Lisson Gallery, London in 1982.

His international reputation was quickly established with solo and group exhibitions being held in the UK and in countries throughout the world. Much of his work is commission-based, his most recent, ‘Collage Portrait of Glasgow’ (commissioned by the Gallery of Modern Art, Glasgow), being unveiled in March 2002 as part of a major one-man show of his work at the Gallery of Modern Art, Glasgow.

In 1988 Mach was nominated for the Turner Prize at the Tate Gallery, London, and in 1992 he won the Lord Provost’s Prize in Glasgow. He was elected Royal Academician in 1998 and lives and works in London.