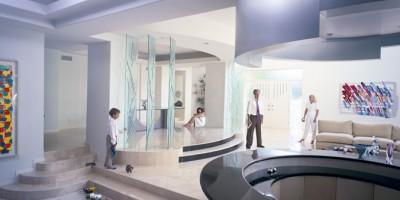 Charlie White first attended the high school for Creative and Performing Arts, in Philadelphia. Later, while a student at School of Visual Arts in New York, he worked as an assistant to artists Laurie Simmons and Carroll Dunham and studied with Marilyn Minter. After graduating in 1994, White moved to Los Angeles in 1996 to attend Art Center College of Design, where he studied with artists Steven Prina and Christopher Williams and received his MFA in 1998.

Using a combination of fiction, artifice, and make-believe to represent the human condition, many of White's photographs explore America’s social fictions and the tensions in identity and perception they generate. White’s earlier works shared a relationship with the directorial forms of photography practised by such artists as Gregory Crewdson and Jeff Wall. This narrative focus can be perceived in his first photographic series ‘In a Matter of Days (1999) and ‘Understanding Joshua’ (2001) which employ a pictorial play between reality and fiction that is occasionally taken to grotesque extremes.

In 2003 White exhibited ‘And Jeopardize the Integrity of the Hull’, a series of eleven photographs that moved away from narrative tableau towards a new form of photographic flatness, looking at popular notions of religion, entertainment, privacy, and pop culture through an infantilized lens.

Three years later in a series of works ‘Everything is American’ (2006) he reconstructs and re-creates historical instances of collective trauma and national anguish, such as the Manson Family murders in 1969 and the 1978 Jonestown massacre.

In 2008 White exhibited ‘The Girl Studies’, a series consisting of a 35mm short film titled American Minor, an experimental animation titled ‘OMG BFF LOL’, and a series of new photographs that move away from the use of the tableau and the fictional narrative.

Charlie White has been a critical contributor to photography's radical transition and his work continues to move the medium forward. White has exhibited his photography internationally since his first solo exhibition in 1999. He has been described by Grace Glueck in the New York Times as "a wiz at set-up photography, directing and staging his narrative stills with cinematic techniques," and David Vellesco in Artforum described his work as "offer[ing] luscious and compelling snapshots of uniquely American psychology."