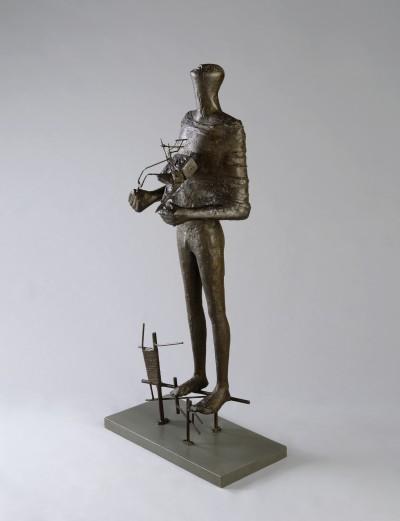 Fully illustrated 72 pages publication with an essay by Peter Davies.

It is largely through the work of one of the most fascinating sculptors of the Twentieth Century, Henry Moore, that Britain took an important place in the international mainstream of art in the early part of the century. His work greatly influenced the course of world sculpture and marked the beginning of the modern tradition in Britain.

In 1952 the exhibition New Aspects of British Sculpture in the British Pavilion at the XXVI Venice Biennale brought to the world’s notice the extraordinary fact that Great Britain now had a remarkable number of highly gifted sculptors quite capable of establishing an international ascendancy.

Six of the sculptors who participated in that significant event are represented again here – Kenneth Armitage, Reg Butler, Lynn Chadwick, Bernard Meadows, Eduardo Paolozzi and William Turnbull. And with them, the two sculptors who paved the way for them, Henry Moore and Barbara Hepworth.

Extract from the essay by Peter Davies:
... 'This representative sample of the best of modern British sculpture highlights a post-war flowering when emerging British sculptors recently returned from sometimes harrowing war experiences, established an entirely new idiom. They were blessed at the outset by career-defining international exposure of the 1952 Venice Biennale where the sculptors included in the present survey participated in the New Aspects of British Sculpture exhibition in the British Pavilion.

The Venice event automatically cast them as successors to their elders Henry Moore and Barbara Hepworth, the former having won the International Sculpture Prize at Venice in 1948, the latter exhibiting successfully there in 1950. Though Moore and Hepworth remained seminal figures, particularly in the case of the Norwich-born Bernard Meadows who began his professional life assisting in Moore’s Kent studio during the second half of the 1930s, the likes of Reg Butler, Kenneth Armitage, Lynn Chadwick and William Turnbull consciously reacted against the pre-war surrealistic biomorphs of Moore or the purist geometry of Hepworth. Herbert Read, the Venice catalogue essayist, wrote how the "consistent avoidance of massiveness, of monumentality, is what distinguished these even from their immediate predecessor, Moore." ...