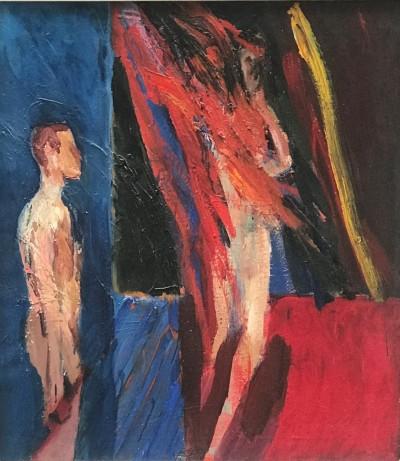 Flamboyant painter with an exquisite sense of colour and design.

Patrick Procktor had his first show at the Redfern Gallery, London, within a year of setting out his stall as a professional artist.

The show was a sell-out before the opening. A year later Bryan Robertson selected him for the first and most famous of the New Generation exhibitions at the Whitechapel Gallery, the show that helped propel co-exhibitors like Hockney, Bridget Riley and John

Procktor was born in Dublin, the younger son of an oil company accountant, but when his father died in 1940 the family moved to London. Patrick went to Highgate school from the age of 10 and, though he enjoyed the art lessons given by the landscape painter Kyffin Williams, he wanted to read classics at university. His hopes were dashed because his mother's wages as a hotel housekeeper were sufficient only to sustain the older brother in further education. Patrick left school early to work at a builders' merchants and joined the Royal Navy at 18: there his talent for languages earned him the most popular and useful of cushy national service options, a training in Russian.

After demob he held down a day job as a Russian interpreter with the British Council, on whose behalf he made many journeys to the Soviet Union; the evenings he devoted to painting and drawing, and on the basis of a single picture hung in a mixed summer exhibition at the Redfern, he was accepted in 1958 as a student at the Slade School, where the formidably influential William Coldstream was a professor of fine art. Fortunately for Procktor's maverick talents, he befriended Keith Vaughan and later met Hockney, then a student at the Royal College of Art

Though Procktor worked with oils and acrylics, he also used watercolour extensively, and very largely the techniques he learned for this deeply unfashionable medium measured the distance between his work and that of his contemporaries.

British pop art came in two strains: one, fostered by the older generation of Richard Hamilton, Eduardo Paolozzi, Nigel Henderson, and the architects' Peter and Alison Smithson, was cerebral and self-consciously socially aware; the other, in which Hockney, David Oxtoby, Allen Jones and Patrick Caulfield were the stars, was more instinctively drawn to the ambient visual imagery of popular culture expressed in anything from graffiti to advertising. Procktor's work lay on the verge of the second group; not pop, but drawing on pop's preference for non-realistic colour and flatness of surface in an edgy and wittily articulated figurative formulation.

He travelled widely, and some of the work he did in Bombay and Venice in the early 1970s suggested a sensibility open to the refined and economical sense of space in the art of the far east that he was to adapt to his own work after visits to China and Japan - the delicate handling of one highly successful portrait of Jimi Hendrix even succeeds in making the guitarist look like a 20th-century samurai.

He was elected Royal Academician in 1996, and though he turned out to be an obstreperous member of this organisation, he remained a social success in a wider sphere. Long before he studied the art he had made friends in artistic circles, starting with Richard Buckle, the organiser of the great Diaghilev exhibition in London in 1954, from whom Procktor acquired a lifelong love for theatre in general and Russian ballet in particular. This was reflected in his painting just as his acquaintance with pop stars brought him commissions for record sleeves.

Apart from Vaughan, Buckle and Hockney, his social circle included Derek Jarman, Francis Bacon and Cecil Beaton, a gay grouping some at least of whom must have raised their eyebrows when, in 1973, he married Kirsten Benson: she and her husband James Benson had been neighbours of Procktor in Manchester Street, Marylebone, London and were the founders of Odin's restaurant. The three became friends and travelling companions.

After James was killed in a traffic accident, Procktor married Kirsten. She sold the restaurant to Peter Langan, and Procktor and other artists he introduced to Langan, from Hockney to Bacon and Lucian Freud, gave paintings to hang on the walls of Odin's as well as Langan's Brasserie in return for hospitality - a wonderful embellishment for the establishments and a pretty good bargain for Langan.