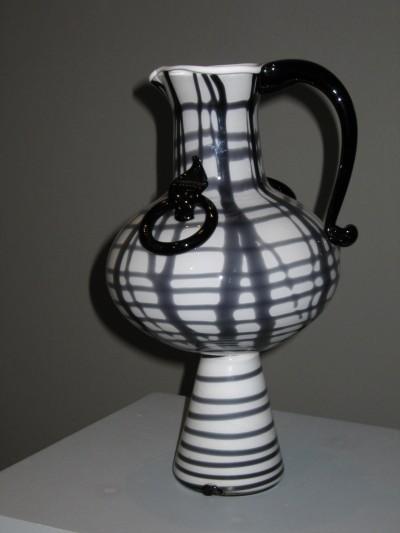 Pablo Ruiz y Picasso, the Spanish Cubist painter and sculptor, was born in 1881 in Malaga, Spain. The son of a drawing teacher, Picasso was to become more famous than artist ever before, dominating western art in the 20th Century.

Living between Paris and Barcelona in the early 1900s, his circle of friends included Guillaume Apollinaire, Max Jacob and Gertrude and Leo Stein. Picasso's Blue Period paintings depict blue isolation and urban squalor and were triggered at this time by a close friend's suicide in a Parisian Café. During this period he created the famous works Blue Nude (1902) and The Old Guitarist (1903/4).

The Circus Meddrano in Paris with its colourful performers induced Picasso to enter his Rose Period in 1905, using rose, yellow ochre and grey on his palette, his portrayal of the performers became softer and more delicate.

Deeply impressed by Cezanne and Iberian Sculptures at the Louvre, Pablo Picasso experimented with geometrical form and in 1906 he painted Les Demoiselles d'Avignon, his first cubist work: geometric form, fragmented and abstracted.

His association with George Braque during 1909-1913 led to the most important art movement since the renaissance, Cubism. In 1912 he started to incorporate newspaper print, postage stamps and other material into his work, a style called collage.
In 1915 he produced Neo-Classical Line drawings in the style of Ingres. After the First World War, his focus on Cubism gave way to a more stylistic existence, Picasso's fame had even shielded him from the attentions of the Nazis in Paris who regarded his work as "degenerate art".