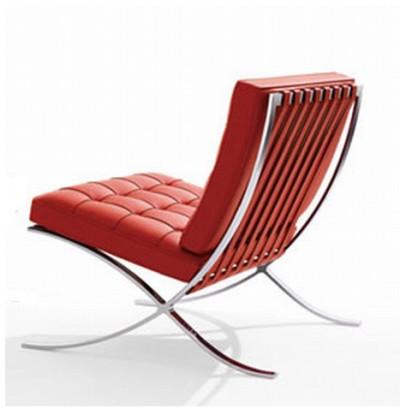 Ludwig Mies van der Rohe, a German architect, along with Walter Gropius and Le Corbusier, is widely regarded as one of the pioneering masters of modern architecture.

Mies, like many of his post WW I contemporaries, sought to establish a new architectural style that could represent modern times just as Classical and Gothic did for their own eras. He created an influential Twentieth-Century architectural style, stated with extreme clarity and simplicity. His mature buildings made use of modern materials such as industrial steel and plate glass to define austere but elegant spaces. He developed the use of exposed steel structure and glass to enclose and define space, striving for an architecture with a minimal framework of structural order balanced against the implied freedom of open space.

Mies designed modern furniture pieces using new industrial technologies that have become popular classics, such as the Barcelona chair and table, and the Brno chair.

His furniture is known for fine craftsmanship, a mix of traditional luxurious fabrics like leather combined with modern chrome frames, and a distinct separation of the supporting structure and the supported surfaces, often employing cantilevers to enhance the feeling of lightness created by delicate structural frames. During this period, he collaborated closely with interior designer and companion Lilly Reich.