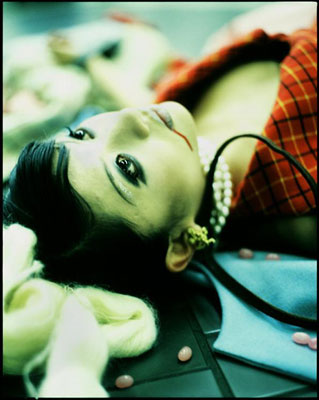 Japanese photographer Izima Kaoru has been creating scenes of sophisticated violence and enchanting horror since 1993.

Kaoru lets famous models and actresses describe fantasies of their own deaths and then stages them for the camera.
Working in multiple panel sequences, his photos allude to film: wide-angle shots set the scene before giving way to medium and close-up views, details of the women's fantasies revealed along the way. The models are perfectly coiffed, hair and makeup flawlessly in place, outfitted in couture by Vivienne Westwood, Alexander McQueen, Jil Sander Jean Paul Gaultier.

The glamour of the models' attire is matched by the unusual locations. The photographer’s graceful treatment of the human figure in a landscape juxtaposed against the shock value of death is even more pronounced in this latest endeavor. And so the photos that show the crime scene (or that of natural death) do not allude to something fatal and irreversible but a kind of elegant and highly aesthetic ceremony.

Kaoru’s images have always had a film-like structure: long shots with bodies that seem to melt into the setting alternate with others that show close-ups of the wide-open eyes of the victims. Yet there is never a real story, only clues, suspicions, allusions: the unlocking of a tale whose mystery will never be revealed. Even the glassy eyes of the models no longer look onto anything or anybody. Perhaps they symbolically look death in the face and continue to live within that explosive moment, with the absolute risk that signifies the extreme contact with ‘diversity’.

Kaoru has been active in photography, video and film since the late ‘70s. He participated in the establishment of Sale, a free paper (1980), and Tra, a cassette magazine (1983). He acted as editor in chief of zyappu, a fashion magazine that he founded in 1994.

Izima Kaoru has exhibited widely in the United States and Europe and is represented in numerous public and private collections internationally.