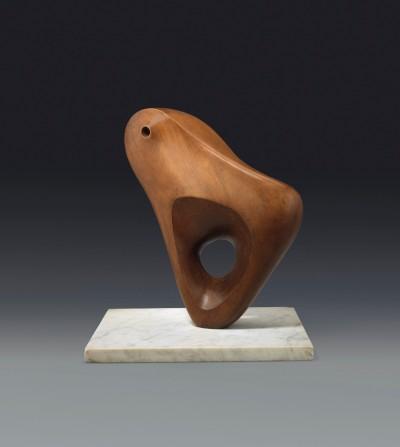 Walnut
32.4 cm high (excl. base)
Signed with initials at the base

F.E. McWilliam was an accomplished sculptor born is Banbridge, Co. Down, a town he claims greatly influenced his work. He attended the Belfast College of Art and then the Slade School of Art where, under the tutelage of Professor of Sculpture A.H. Gerrard, he changed his mind about a career in painting and redirected his focus towards sculpture.
After being awarded the Robert Ross leaving scholarship, he travelled with his wife to Paris where he became inspired by the work of sculptors Constantin Brâncuși and Alberto Giacometti. His visit to the International Surrealist Exhibition in London saw him turning away from his favoured semi abstract style, and in 1937 he exhibited with the British Surrealist Group. The artist commonly worked in series, focusing on a particular theme. For example his series of bronzes which were inspired by the bomb that exploded at the Abercorn Tea-Rooms in Belfast (1972), entitled Women of Belfast.
Aside from sculpting, McWilliam taught art at the Slade School in London and enlisted in the Royal Air Force, being stationed in England during WWII where he interpreted aerial reconnaissance photographs. He has been presented with a number of awards including a C.B.E., the Oireachtas Gold Medal and an Honorary D. Litt. from Queen’s University Belfast.
The artist exhibited regularly, including at the Waddington Galleries and the London Gallery.
A retrospective was held in his honour at the Tate Gallery, and the Banbridge District Council opened a Gallery and Studio named after and dedicated to him