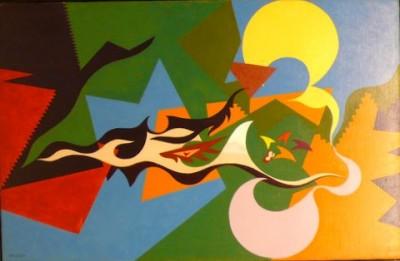 Painter and designer of tapestries, Jean-Marie Euzet was born in Sete, France in 1905.

He studied at the National School of Decorative Arts in Limoges, where later in 1948 he became a professor.

His early work of the 1920s was influenced by Cubism. However, on meeting the artists Louis Baudron and Henri Valensi, the founder of the Association des Artistes Musicales in 1932, he became inspired by their Manifesto which sought to interpret the rhythms of music in two dimensions through abstract shapes.

His work underwent a change between 1949 and 1956. He concentrated on abstract compositions, where the curve was the dominant feature, but with some allusions to a figurative framework.

Euzet exhibited at the Salon des Realities Nouvelles, Salon des Independants and the Salon Comparisons where Henri Valensi curated the Musicaliste room. He also exhibited in group exhibitions in Amsterdam, Prague, Vienna and The Hague.

Euzet designed several tapestries for the Manufacture National d’Aubusson, included The Port, The City, and a series of three tapestries entitled Summer Night.