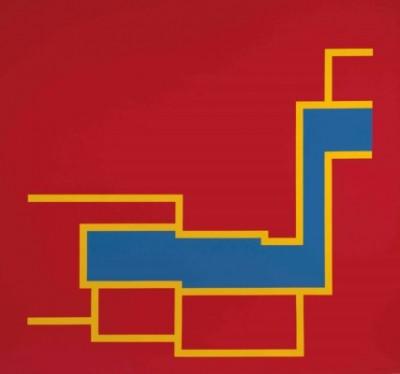 Denny took a teaching post at the Hammersmith College of Art between 1957-9 and Bath Academy of Art, 1959-65, and later at the Slade School of Arts, London.

Robyn Denny exhibited at the Young Contemporaries in 1953 and in 1958 he had his first solo show at the Gallery One, London.

Denny was prominent among the British Situation exhibition organized by the critic Laurence Alloway in 1960.

Robyn Denny represented Britain at the Venice Biennale in 1966 and seven years later a retrospective exhibition was held at the Tate, London.
Denny was the first artist in England to respond to American abstract expressionism and to establish an abstract style free of natural associations. Denny was writing on art for the international art magazines such as Das Kunstwerk and Art International.