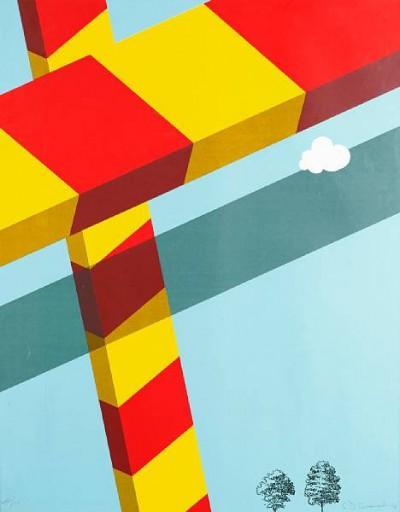 American painter and printmaker D’Arcangelo studied painting in Mexico City from 1957 to 1959 with John Golding under the terms of the G.I. Bill.

His reputation as a Pop artist was established by his first New York one-man exhibition in 1963 where he showed his first acrylic paintings of the American highway and industrial landscape. His large-scale canvases visually transported the viewer through a time sequence, as if travelling along a highway, catching glimpses of trees, dividing lines, signs and route markers. In subsequent works, D’Arcangelo continued to examine the American landscape both as directly experienced and in the form of generalized contemporary symbols.

An essentially flat and impersonal style allowed him to suggest an illusionistic space without sacrificing the viewer’s consciousness of the picture plane.