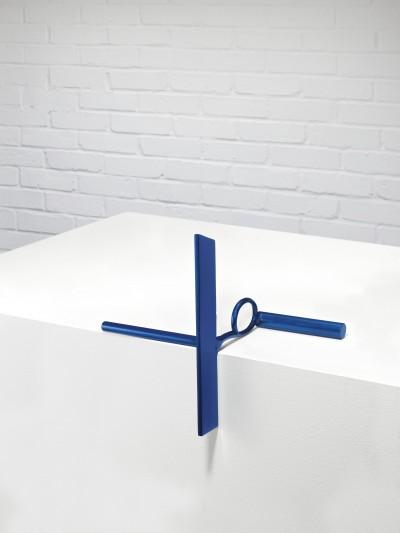 Caro was Britain's greatest sculptor, assuming the mantle of his teacher Henry Moore and winning the "battle" for abstractionism. He enjoyed an international reputation second only to that of Henry Moore and made his name during the 1960s with the invention of a new kind of abstract sculptural technique involving the use of steel parts, welded together then painted in bright colours. His use of colour enabled him to amplify mood in his work and suggested a freedom and lightness not easily achievable with industrial steel. It also helped him to establish his own artistic persona against that of Moore, for whom Caro had worked as an assistant during the early 1950s and for whom the idea of “truth to materials” had been all-important.

Caro’s trademark pieces were reminiscent of the cubist collages of Picasso and were – in accordance with modernist abstract principles – free of figurative allusion. Working in painted steel from the garage of his home in Hampstead, he found that the process involved a certain amount of trial and error. Caro recalled: “I remember finishing Early one Morning [1962, subsequently bought by the Tate Gallery], which had become so long I’d ended up with the garage doors permanently open. I’d painted it green and we’d put it out on the lawn to get a better look. I woke up the next morning and opened the curtains and there it was. But the colour was wrong. Sheila [his wife, the painter Sheila Girling] said 'that’s definitely a red sculpture’. She was spot on, and that it is what it became.”

When these steel “open-planned” works were first shown in London during the early 1960s, the times seemed right for such iconoclasm.

Too many young sculptors, it seemed that Caro had liberated their art from the weight of past association, and many took his pronouncement that “sculpture can be anything” rather too literally. But Caro himself never truly believed his own dictum; he clung tenaciously to a belief in the language of three-dimensional form — often comparing the process of sculpture to musical composition. All his sculptures depend on an intuitive sense of balance and placement, and on the harmonious relationship between one part and another.

He was astonishingly prolific. Over six decades as a sculptor he produced thousands of works, examples of which are now to be found in every major collection of contemporary art in the world. Though he worked in a variety of different media — experimenting with wood, paper, lead, silver, clay and bronze — steel remained his favourite material: “It enables me to do things that no other material allows,” he said.

Yet he was also often inspired by painting — Matisse’s The Moroccans, for example, inspired at least three Caro pieces over the years. Later in his career, he surprised those who had him marked down as an abstract sculptor by drawing more explicitly on paintings — for example by Monet, Manet, Rembrandt and Rubens — interpreting two-dimensional ideas in three-dimensional forms.

One of his most dramatic works, the 20-metre long After Olympia, was made following a trip to the temple of Zeus at Olympia in Greece, a tribute to the friezes that originally adorned the temple pediments. Breaking modernist conventions that sculptures should not be allusive inevitably led to accusations that Caro had betrayed his principles.

Later he continued along this more figurative vein, with representations of characters from the Iliad in a sculptural re-enactment of the Trojan wars in steel and clay.

One of his most audacious experiments was the development in the 1990s of what he called “sculptitecture” — large sculptures, reminiscent of sophisticated playground follies, that incorporated architectural elements such as ramps, steps or towers. Caro got the idea for this new genre at a summer workshop in America in 1987 where he and the architect Frank Gehry had discussed the idea of exploring the relationship between their two disciplines.

Among such pieces, in 1991, was the Tower of Discovery, a 13-metre steel tower containing a warren of spaces to explore — one of Caro’s most dramatic works. When first exhibited at the Tate, people flocked to see and climb through it. Its success brought Caro an immediate commission which led to Sea Music, a large linear sculpture incorporating a lookout platform on the quayside at Poole harbour. Soon afterwards he was invited to make a work to celebrate the opening of a new museum at Grenoble.

He was then involved, with Norman Foster and Chris Wise, in the winning entry for a competition to design the first bridge to be built across the Thames for more than a century, linking the new Bankside gallery with St Paul’s. The design incorporated a minimalist steel blade spanning the river with a circular ziggurat at one end and a cascade of ramps and steps at the other. Despite being dubbed “wobbly” after its unveiling, and requiring a £5 million refit, it has gone on to become an affectionately regarded London landmark.

Among Caro’s major works — and one of his most monumental — was Goodwood Steps, unveiled at Goodwood Park in 1996. It was then the largest sculpture in Britain, a huge and hugely confident 120ft-long rusted steel sculpture made up of seven sections of two tons each, containing 14 flights of giant steps paired back to back or side-to-side. Caro conceived the work as a dialogue between the formality of architecture and the informality of the rounded contours of the surrounding chalk landscape; he went on to produce several other versions, including the Halifax Steps and the Millbank Steps.

But he was not simply a fine sculptor; he was also that rarest of breeds, the successful artist who could also teach superbly. From the 1950s to the 1970s, when he taught at St Martin’s School of Art, he inspired a new generation of contemporary artists and sculptors including Philip King, William Tucker, Richard Long, Barry Flanagan, Gilbert and George, Richard Deacon and many more.

Anthony Caro was educated at Charterhouse, where he showed early artistic inclinations and during holidays worked in the studio of the sculptor Charles Wheeler. He had not at that point made up his mind to be an artist, so followed the advice of his father, a stockbroker, that he should “study something like architecture or engineering”. In 1942 he duly arrived at Christ’s College, Cambridge, to read Mechanical Sciences.

After graduation and National Service in the Fleet Air Arm, Caro, who by that time had discovered his true vocation (and had “battled and battled” with his father to be allowed to pursue it), enrolled at the Royal Academy Schools, winning a scholarship. While still a student, he “pretty much turned up” at Henry Moore’s studio at Much Hadham and asked for a job: “He didn’t say 'yes’. But he did ask me in for a cup of tea and told me to come back in six months’ time. Six months to the day later I rang him, and he told me I could start the following Monday.”

Caro first came to public attention as a sculptor from 1955 with figurative clay sculptures. These pieces, which, according to the artist, aimed to “describe what it’s like to be inside a human body”, owed much to Moore’s influence, though even then it was clear that they were the products of original and radical talent.

His real break with Moore came in 1959 when he won a travel grant to America, where his visits to studios and museums and meetings with young artists pushing at the frontiers of design fuelled his own ambition and imagination. He was much impressed by the critic Clement Greenberg, who criticised him for his classicism and attachment to the past and advised: “If you want to change your art, change your methods.” Above all, he was entranced by the work of the American sculptor David Smith, who drove Caro on by treating him as a rival rather than as a talent to be nurtured. “Moore was like both a parent and teacher to me,” Caro said in an interview with The Guardian last year. “Smith was much more like a competitor.”

Having despaired of clay as a medium for abstract sculpture, Caro determined to find new material. He got the idea of working with steel after a visit to the docks.

As he became more successful, Caro moved from the Hampstead garage to a vast studio in Camden where he employed a number of assistants. He also had a large workspace in upstate New York.

He remained something of an iconoclast. In 1990 he weighed into the debate about Canova’s The Three Graces (which the Victoria and Albert Museum was attempting – successfully as it turned out – to save from being exported to America). He steadfastly refused to join the Royal Academy (“too complacent, not enough good art... summer shows a disgrace”) and claimed to have accepted a knighthood only “so that Sheila could deservedly be called a Lady”.

Yet he accumulated accolades from the artistic Establishment, becoming in 1998 the first contemporary sculptor invited to hold a one-man show at the National Gallery; by the end of his life, his work was held by more than 175 public collections.

He continued to work into old age, in 1999 beginning a nine-year project to restore and install new sculptures in a church in northern France destroyed during the Second World War. His spirituality seemed rooted more in his art than in his Jewish family upbringing. “Is art so different from religion?” he asked. “It feeds the spirit, and through it you also try to find this inner part of yourself.”

Though Caro was never overtly political, he admitted to having “very strong views about something like Suez”. He insisted that such views “had nothing to do with the work I was making at the time”, but, as the years went on, he found that blanket television coverage of the wars in the Balkans as well as in Iraq and Afghanistan “does begin to seep in somehow”.  Certainly, some observers detected a political edge to The Barbarians (2002), a large piece featuring terracotta figures on wooden gymnastic horses.

Perhaps his most ambitious project, however, did not see the light of day. Having been asked to make a piece for Park Avenue, in New York, he set out to produce something so large that it could be appreciated by motorists speeding by, as well as by pedestrians. He travelled back and forth between London and New York, eventually proposing a work the entire length of three Manhattan city blocks. Owing to the project’s monumental cost, it was abandoned. Caro, not long downhearted, quickly divided up his maquette for the project into 12 large-scale individual sculptures. Some observers have already suggested that the Park Avenue series may come to be seen as among the major achievements of his career.

Anthony Caro was the subject of a host of awards and honorary positions. He was a member of the Council of the Royal College of Art from 1981 to 1983 and of the council of the Slade School of art from 1982. He was also a trustee of the Tate Gallery from 1982 to 1989.

He was created CBE in 1969, knighted in 1987 and appointed to the Order of Merit in 2000 (the first sculptor to be so honoured since Henry Moore).