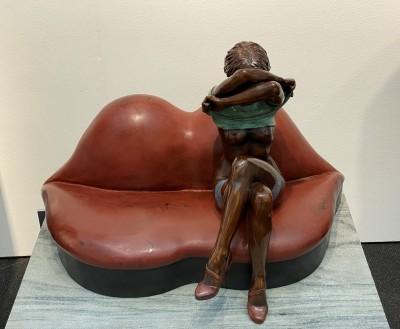 British sculptor, Ronald Cameron established an international reputation as the master portrayer of the classical theme of the female nude figure, captured in a modern manner and designed to portray the poise and confidence of the dynamic young liberated woman.

His life-size female nude bronzes, their movement is frozen in time, are arresting in their quality of workmanship, elegance, life-likeness and attraction. His superior craftsmanship in working with clay and wax commanded great respect amongst his colleagues, the most notable was his collaboration with the artist David Mach.

Cameron had a long and successful career in sculpture, receiving commissions in almost every medium, from life-size bronzes to miniatures in gold and silver.

His early talent and interest in art were very wisely noted whilst at grammar school in Horsham, Sussex. Whilst there, the school allowed him to forego many of the traditional school subjects, instead, he spent many more hours drawing and painting in the art room. His major inspiration came from seeing the Rokeby Venus by Velasquez in the National Gallery in London and as a young teenager; he was stunned by the beauty of the painting. This inspiration lasted a lifetime as can be seen throughout his work over the years.

Cameron attended Camberwell College of Art, London, between 1947 and 1953, where he studied sculpture under Doctor Vogel and gained the National Design Diploma.

In the formative years, when Henry Moore was the contemporary idol and had a very powerful influence of the on the sculpture, Ronald refused to be pulled in that direction. He loved the traditional work, greatly admiring both Canova and Bernini.

After two years with the Gordon Highlanders in Malaya as a national serviceman, he spent ten years as a black and white line drawing artist with an advertising agency. During those years in his spare time, he undertook different sculpture work and by 1963 he became a full-time professional sculptor.

Cameron exhibited widely, notably in London at the Bruton Street Gallery, and the Alwin Davis Gallery, where his work was showed together with sculptures by Henry Moore, Elisabeth Frink, Lynn Chadwick and Barbara Hepworth amongst others.